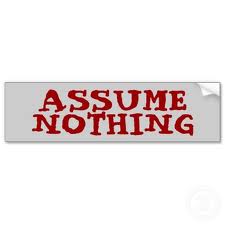 This post is partially written with tongue-firmly-in-cheek, because what comes next, despite the emotions and wrath conjured up in the blogger in question, I have found a combination of bemusing, ironic and humorous.  There are times you simply have to laugh things off.  Most often that is easy do, when you know that what is claimed by the other person has no basis in truth, it makes it simply not matter.  Especially when it’s forgettable.  And even when very wrong, I still respect someone’s right to their own opinion.

I don’t mean any of that in disrespect to said blogger, because I truly meant what I said in the comment I wrote which generated such indignance and wrath in her, that I mean her no ill-will.  (That still applies, despite her name-calling and entire misrepresentation of myself.)  That said, I term this post a ‘right of reply’ but one which is a secondary consideration to raising this issue as something happening out there in the blogosphere, which warrants discussion as a blog post in itself.  I guess that issue is the perils of the online world of autistics.

So, this (then) self-diagnosed blogger had written a post about self-diagnosis of Asperger’s, in which she criticised a certain ‘type’ of self-diagnosed individual whilst extolling the validity of her own self-diagnosis.  This claimed validity was mostly based on the fact that she believed she had researched well and was a qualified doctor, as if that automatically gave her prize claim to being correct.  (It transpires that she is a ‘primary care’ doctor and not a psychiatrist, psychologist or even apparently a doctor in an autism-related field).

My reply to her post on this topic, is screenshotted in prime place in her post to which this post is about (significantly, even above screenshotted Tweets from someone calling her names and making nasty, hateful comments which she also included in her post as if we had committed the same ‘offence’, which makes me think that my comment must have really touched a nerve), a post she devoted to accusing me of “trolling” her and sending her “hate mail”.  Can someone not be honest in the appropriate forum without being called a troll?

There are apparently online storms about self-diagnosis, I don’t socialise on Twitter or engage in that way online with the remainder of the autism community (I don’t have the time!), so I’m not involved in those, I just become vaguely aware on the periphery on rare occasions.  A respected researcher Dr Luke Beardon has written his own blog post here about the self-diagnosis debacle, if you want to read more about what’s going on however.  I only touch on this here, as the basis of what’s behind the topic of this blog post, rather than get side-tracked by discussing that whole subject.

Hell hath no fury like an Aspie that believes they have been scorned!  Sometimes you will hear autistics say “If only the world was full of just autistics!” but clearly, when you have people who struggle understanding the motivation of others, have impaired empathy in some areas and may be hypersensitive to perceived criticism (which can sometimes be from a lifetime of struggling to fit in with NTs) it will never be plain sailing.  Just add in the general potential to read the written word differently from how it was intended and it can be a veritable recipe for disaster.  Clearly this blogger felt very scorned.

I personally think a world full of autistics would be very problematic, rigid people, people who struggle socially, who can misunderstand (and clearly misrepresent sometimes too 😏!) wouldn’t work out too well.  Was I too blunt in the comment which offended this person?  Possibly, but true Aspie qualities of intense need for justice (don’t like hypocrisy) and honesty, can lead by the nose at times.  I won’t deny my own empathy has areas of impairment.  Blogging is commenting on life matters, it’s up to people what they blog about, just don’t forget you are online!  And disable your comments function already if you don’t want to listen to the opinions of others!  Otherwise you may as well just keep a personal diary!

So there it is – and the moral of this post?  Don’t automatically perceive someone’s comment as malicious or label it trolling if you are offended by it, that doesn’t mean it was written with malice intended.  Look at the logic of the content and keep emotions out of it before you respond.  Aspies usually tend to work logically.  Aspies have traits which can be used for good or bad (and anything in between) as written about here.  When an Aspie attacks another Aspie, does it help the autism community?  Well, let’s try to find a positive here, it helps any NTs reading, understand more about how Aspies tick and most of the time, they will get to read the insights of someone who is wired differently to them and maybe that helps autism awareness overall.

And now I will go back to laughing it all off.  Blogging will never be dull that’s for sure!

PS as said blogger has publicly questioned my own diagnosis, perhaps she’d like to look at my brain scans  I also have my access to my genome with plenty of autism markers, not to forget the heritability of autism with my children being autistic, or the fact that my diagnosis was confirmed by 3 separate professionals independently, then of course there is the fact that I have another condition related to autism, or my diagnosis of SPD, or the many tests I have taken which all score me for ASD and related aspects…I trust that’s reassuring enough to put paid to further uncertainty.